There's some changes about rules onto federations. (https://www.virtuafoot.com/#federations)

Here's the link of the official announcement on the French side of the VForum : https://www.virtuafoot.com/#forum?topic=156992

I will only traduce some parts (the technical ones) because I know that you are not concerned about other ones (some parts about the behaviour of some French players).

Let's go :
- INFO : From now on, when a player is selected by a Federation, the gain for the lending club is 1 M + 0,1 xp per match (excluding Federation subsidy).

- Each coach of a Federation commits himself to select the best available players of his Federation. In case of abuse, there will be a sanction.

- Each selector of a Federation MUST contact the club owner of the desired player to ask for its agreement to select him.
If a club refuses the selection of its player, the coach of a Federation must respect its choice.
If this rule is not respected, and in case of a repeat offence after a warning, there may be a penalty.
If a feature appears afterwards on the game ("accept/refuse" button), this paragraph will become null and void. See topic, in french, in the improvement projects part of the french forum: #forum?topic=156975

- Player naturalization : This is a paid feature of the game via the VF Store and it is legal.
However, to avoid any abuse, a player naturalized to be selected by a Federation will not be able to change nationality again during the same season.
Example: a French player changes nationality and becomes Cameroonian to join the Cameroon Federation. This player will not be able to change nationality and will have to remain Cameroonian for the whole season. If this rule is not respected, there will be a sanction.

- We remind the rule: a Federation selects the BEST players available.

- These rules are likely to change according to the evolution that Aymeric45 (the webmaster) will bring to the Federations.
The information will have to be relayed by the Presidents of Union.

Il y a 8 mois
Dear new chairmen and selectors of a Federation,

If you have any question, I will try to find the answer on the French side of the forum, because it's a new feature and maybe some things aren't clear.

Il y a 8 mois
They are not focused on donating and loaning but this.

We support many clubs but some of them get offline with no donations.
So what's the benefit of union which not gain any for clubs...

This topic is about Federations (https://www.virtuafoot.com/#federations), the countries, a new feature in the game.
It's kinda like the selection of an union but with the players from everywhere on the game, with the same nationality.

By the way, I will still answer to your question :

ValaValla : We support many clubs but some of them get offline with no donations.
So what's the benefit of union which not gain any for clubs...

Being chairman and / or treasurer of an union is an hard mission.
You have to be confident with all your members, especially when you give financial help or loan.
And, yes a lot of newbies can give up the game without any warning, and without giving things in return.

The only advice I can give as an "old" player, and even a past chairman of a poor union in the past.
Keep your money for the essential : organize internal competitions, rewards for members which give more points by playing Inter-Union games (and help union to grow up in the ranking of union).
Limit the loan or no loan for the good of the financial situation of the union.

To finish, feel free to create a topic about Union, I will participate when I can.
Let's talk here, about the new feature : the Federations.

Il y a 8 mois
About Federations :
With the new rules, you have to contact each club owner of a potential international player BEFORE select him for a match.
/!\ Do it to avoid punishment.
Because some managers were unhappy being deprived of their best players, before their club's match.

Unfortunately, there's no button to send a collective message, like the one that exist in the panel of a selector of an Union.

But, there's a trick to send a collective message :
You can type all the pseudos of the receivers separate with a semicolon ;
example :

Il y a 8 mois
why not create federations for the different leagues? Like the African league to have it's own federation, France,rest of Europe, Belgium and so forth.

Il y a 8 mois
@ Ouma manases
It's one federation per nation. It's a new feature.
I'm not sure that it would be easier to define some rules with the differents leagues than actually.
To be honest, rules are still in debate on the french Vforum.

Il y a 8 mois
I will try to explain all the things about federations.
I will modify, if I learn more details or if some rules change.

INTRODUCTION
- Federations are at the last place in the menu Competitions : https://www.virtuafoot.com/#federations
On the tab Elections, you can candidate for a chairman's mandate of 7 months.
To be candidate you need to pay 1M, and write a speech to convince others managers to vote for you.
Every manager can read and vote for federations, on the tab federations > elections.
A new federation can be created each 7 days by clicking the button "create a federation", if all federations created already have at least 2 candidates.

TUTORIAL
Congratulations, you are elected at the head of a federation. Let's see what you can do.

Actually, the federation look a like a level 1 club (with some disabled sections) + a panel that look a like the selector's panel of an union.
You can ignore "club news" because there are the same than the normal club for a level 1 club.

- Disabled sections : transfers, treatment centre, youth academy, TV channel, buildings (except stadium), friendly games, press.
- Usefull section :
Stadium : you can build seats and change the name.
Sponsor : you can take the sponsor to get the reward but without the bonus, because it's the similar sponsor as a level 1 club
Jersey : you can create the jerseys for your federation.
Events : you can pay for events, some are useful but some are not really adapted for a federation. 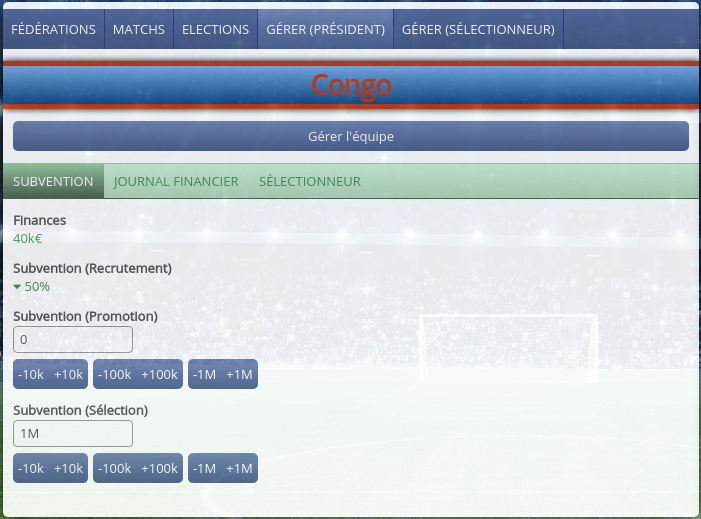 The chairman can choose his selector, by typing the UID of the club.
* The UID is a number (Universal IDentification), this number is just after the name of the manager :

The chairman can be the selector too , it's not forbidden. 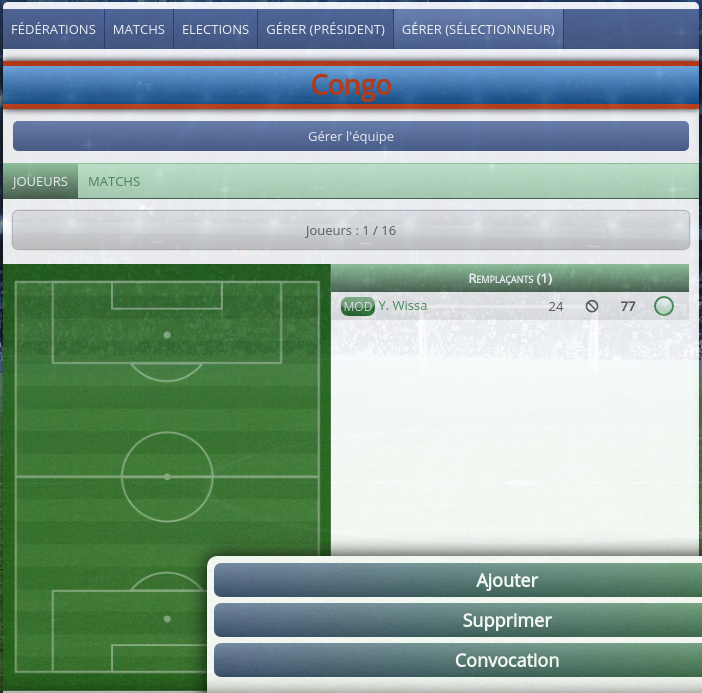 - he can add player of the nationality in the selection. (the rule one player per club is implement in the game)
*note : the selector can select more than 1 player from his club, but the reward for players will be limited at 1M, to avoid abuse. (remind you should take the best players)
/!\ You MUST contact the club owners and get their agreement, before invoke players.
/!\ when a match is programmed, the selection automatically invoked.
- with the button "manage the team", he can access to the club/ federation, to change the tactic, etc ..;

the finance
A federation can get donation from others clubs of the game. A federation earn money with the reward (rétribution) with the general ranking of all federations.

PS: I will edit this post, If i get more infos.

Il y a 8 mois
How are federation matches organized?

Il y a 8 mois
I guess it's like the selector of an union.
But i will get some details on the french Vforum, to explain it well.

I want to remind you that you have to get the agreement of the club owner of an international player. Actually, with the rules, get screenshots of these agreements are advised.
=> Like I said by private message, I can be your ambassador (with your permission), to talk with french managers and get their agreement on a topic of the french VForum.
I can do it for all english talking federation, just contact me here or with a private message.

By the way, when you organize a match, the list of players is automatically validated.

Another thing, bugs still exists about federations : for example, yesterday there was an international game at 18h, but players get invoked at 20h ... :/
I think it's better to wait a bit that adjustments can be done.
Retour